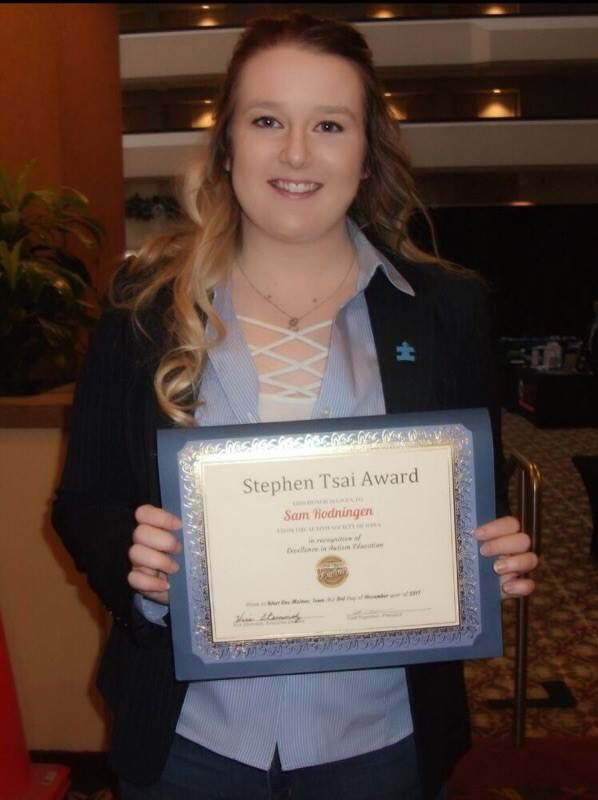 Samantha Rodningen, a behavior technician at One Vision Children’s Autism Center in Clear Lake, is the recipient of the Stephen Tsai Award for Excellence in autism education from the Autism Society of Iowa. Rodningen received the recognition at the annual Autism Society of Iowa conference, held Nov. 3 in West Des Moines.

The Tsai Award is presented each year to an outstanding individual in Iowa who has made an impact on individuals with autism spectrum disorders.

Rodningen, 19, of Clear Lake, has been employed at the Children’s Autism Center since November 2014. She is the youngest person to ever receive the Tsai Award.

According to those who nominated her, Rodningen knew from a young age the importance of accepting and advocating for those with autism spectrum disorders. Her passion to do so only strengthened as she aged, resulting in a determination to help children with autism and their families lead more fulfilling lives.

About the Stephen Tsai Award

Steve Tsai is a 36-year-old with autism who wants to show his appreciation to those who are helping people like him by establishing the Stephen Tsai Award for Excellence in autism education. Tsai was diagnosed with autism at the University of Iowa autism program when he was 3 years old and is now a productive citizen. He is living a full life because of the many people who have helped him along the way.