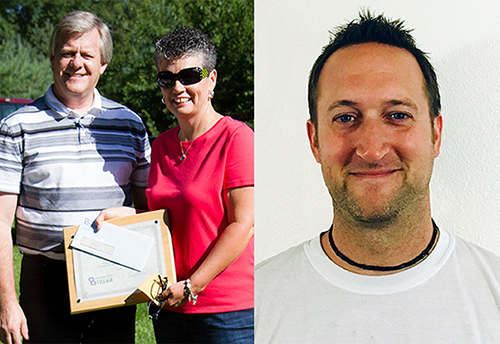 Teresa Klein and Steven Seufferlein are the recipients of the most recent Tom Thornblade awards, presented at all-staff meetings held July 26.

Teresa, a supported community living supervisor at the Blake Drive home, has worked at the Village for 26 years. When she was first hired at the Village, she worked as a job coach before working under Tom Thornblade himself as a goal coordinator in Four Seasons and Wildwood cottages. Following Tom's retirement, she assumed his position of goal supervisor and, after a reorganization in 1998, became team leader of Bedrock cottage.

In December 2015, Teresa moved to work at Ralph Schroeder Group home and eventually settled into her role at Blake Drive house.

According to those who nominated her, Teresa works hard to train her staff to be patient and understanding. She always lets staff know how much they are appreciated and is an honest, caring, hard worker.

Teresa said the things she enjoys most about her job are the people she supports and the friends she's made.
"There has never been a day I did not want to go to work," she said. "It is so rewarding and I love it."

Steven, currently a shift coordinator in Executive cottage, has worked at the Village for almost four years. Prior to working at Executive, he was a PSP in Moon Valley.

According to those who nominated him, Steven shows a "one staff" attitude by working to get to know and relate to staff and those he supports, even if he's not directly assigned to them. Others commended him as a positive role model who often invests his own time to benefit Village interests, such as the LIFE Expo.

"Steven balances a great sense of humor with a deep sense of purpose to do what is right...," said Tony Jennings, who nominated Steven. "He is an exemplary ambassador for the Village."

Steven said his favorite part of his job are the amazing people he works with, both staff and clients. However, he chooses to come to work everyday because he enjoys surrounding himself with people who care.

"Ever since I came to the Village it has been an encouragement to see others care so much," he said. "From the conversations walking through the KLC to the relationships at every home and site, the Village is full of people who genuinely care."