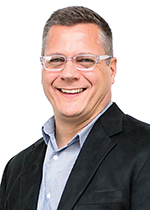 Michael Mahaffey, chief development officer for One Vision, recently was honored as 2017 Boss of the Year by the Mason City Chamber of Commerce. He received the award, which recognizes his impact on other employees throughout One Vision, at the Chamber’s annual luncheon in October.

Mahaffey started his career with OV more than 25 years ago. Today, he oversees many areas, including business development and employment services. Several testimonials from past and present OV employees accompanied his nomination for the honor, many speaking of his ability to inspire those he works with to embrace their strengths and become the best possible versions of themselves.